Anti-LGBTQ+ Initiatives: What Is an Educator to Do?

From the “Don’t Say Gay” bill to bans on transgender youth in high school sports to claims of abuse against intact families for providing gender-affirming care to their children, the past year has seen a record-breaking surge in anti-LGBTQ+ initiatives across the United States.

According to an NBC News report in March, 238 bills had been proposed just in the first three months of 2020, with nearly 670 bills since 2018. “The slate of legislation includes measures that would restrict LGBTQ issues in school curriculums, permit religious exemptions to discriminate against LGBTQ people and limit trans people’s ability to play sports, use bathrooms that correspond with their gender identity, and receive gender-affirming health care.” For a comprehensive list of anti-LGBTQ+ initiatives by state visit, Freedom for All Americans. 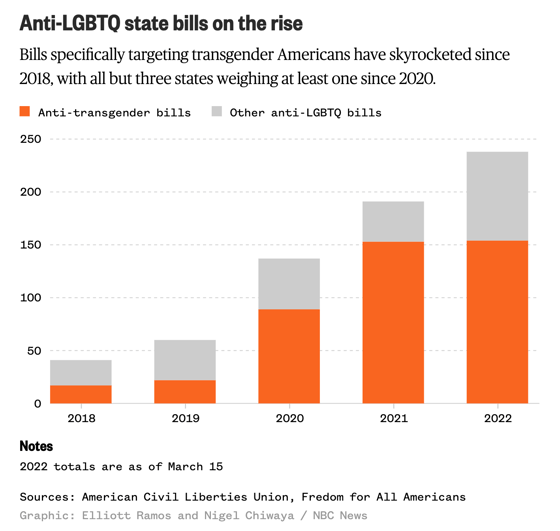 The debate continues and is escalating despite the clear evidence that these initiatives are hurting kids. Harassed at home, in school, and in the community, rates of suicide, depression, and anxiety are rising.

An ABC report in March 2021 examined the impact. As one young person noted, “My overall experience dealing with these bills is the horrible thought that I am going to have to watch another of my friends get buried in the ground. I have already lost two this year to suicide.” A national study by The Trevor Project in 2021 with nearly 35,000 participants underscores the danger for LGBTQ+ youth:

Additional evidence of the impact of discrimination and stigmatization can be seen in virtually every area of an LGBTQ+ child’s life:

At school: A comprehensive 2019 survey by GLSEN found that school experiences are fraught with trauma.

At home: Family rejection correlates with every risk factor a child can face, everything from suicide to substance abuse to self-harm and even cigarette smoking. A 2021 survey by The Trevor Project indicated that only one out of three LGBTQ+ youth were living in affirming homes. Caitlin Ryan, Ph.D., LCSW, founder of the Family Acceptance Research Project at San Francisco State University, found that highly rejected LGBTQ youth were eight times more likely to attempt suicide than those who were even somewhat affirmed. 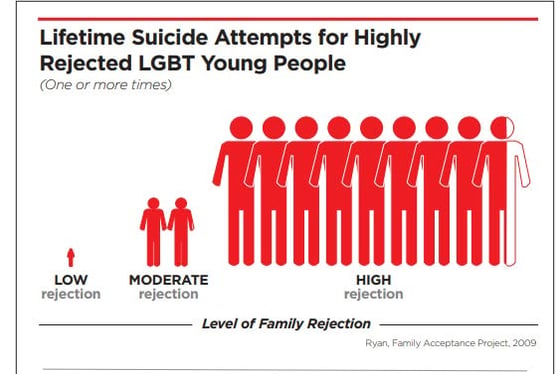 In the community: The most recently available hate crime statistics from the FBI demonstrate an uptick in bias-motivated crimes. Although crimes based on race and ethnicity continue to dominate the violence, 23% of the bias attacks focused on sexual and gender minority targets. The Human Rights Campaign noted that “Yet another year with alarming levels of bias-motivated crimes underscores just how urgent it is to address this hate crimes epidemic. This year, we saw a tragic new record of fatal violence against transgender and gender non-conforming people in this country, particularly against Black and Brown transgender women. These alarming statistics represent real trauma for individuals and families across this country who have to bear the brunt of these hate crimes.”

So, what’s an educator to do? Here are three things you can do to protect and affirm the youth in your classrooms:

Want to learn more about how you can help? Join me with Jeff McCoy and Gaggle on Wednesday, June 22 at 3:00 PM ET for the Student Wellness Series: LGBTQ Student Challenges webinar. During this event, we’ll explore best practices for how educators can support LGBTQ students immediately and in the long-term.

Robin is the Founder and former Executive Director of True Colors, Inc. She helped create one of the first LGBTQ+ mentoring programs in the country in 2005. She has co-authored two books, a book chapter, and several articles on LGBTQ+ youth and is a nationally recognized thought leader. She is the recipient of numerous awards and is an adjunct professor at Central Connecticut State University, teaching intergroup communications and human sexuality. In 2021, Robin was appointed by Connecticut’s Governor Lamont to the newly formed Hate Crimes Commission.

A nationally known expert on LGBTQ+ youth, Ms. McHaelen offered this blog as an introduction to this important topic. She will explore these issues and much more during Gaggle’s upcoming webinar on June 22.

June is Pride Month, a time to honor the impact of LGBTQ individuals throughout history, including the pivotal Stonewall...

Since the onset of the COVID-19 pandemic, Gaggle’s data has revealed K-12 students’ increasing struggles with suicide, s...